Agatsuma Zenitsu ( Agatsuma Zen’itsu) is a Demon Slayer and a member of the Execution Team. He is Kamado Tanjiro’s companion and one of the main protagonists of the Demon Slayer: Kimetsu no Yaiba (Demon Slayer).

Zenitsu is fair-skinned and has eyes that turn from golden-brown color. He has short, orange-yellow hair. Before becoming the Demon Slayer, Zenitsu’s original hair color was black, but during his training was struck by lightning, causing his hair color to turn yellow. Sometime after the battle at Mount Natagumo, his arms shrank due to the poisoning of a Devil, but it returned to normal thanks to Kocho Shinobu’s potion. He has a lighter-colored Demon Slayer uniform consisting of a dark brown gakuran shirt, white belt and wide-legged hakama pants, along with an orange-yellow haori, patterned with triangles. He also wears tabi socks tied with three ribbons in the front, patterned with his haori, along with white sandals. 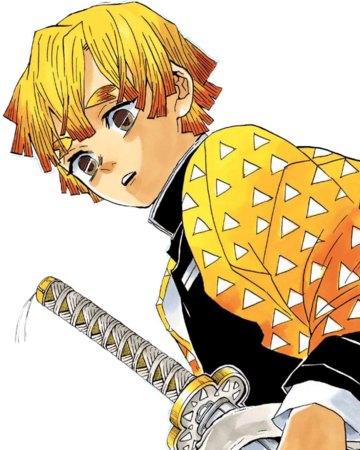 Zenitsu is a shy person, thinking that he will not live much longer because it is too dangerous to hunt demons. He is a girl-lover, always swooping on girls he thinks is cute and proposing constantly making others uncomfortable.

Although losing her dignity, being afraid, always crying and running away. But he always wanted to live up to the expectations that others put their faith in him. He declares that he wants to live a peaceful life, where he can be helpful to everyone.

Zenitsu respected and admired her comrades, especially her late teacher, Shihan. When Zenitsu became serious and focused, he dismissed his inner shyness and fought a completely different personality.

Zenitsu is an orphan so he is not fully educated. Before learning The Breath of Thunder, Zenitsu once fell in love with a girl and provided money for her, but the girl ended up following someone else and leaving Zenitsu to live in debt. When he saw that Zenitsu was in trouble, Kuwajima Jigoro helped pay off his debt and decided to train him as a swordsman.

Zenitsu began to regard Jigoro as his grandfather and began training with another of his disciples, Kaigaku. During one of the training sessions, Zenitsu climbed up a tree out of fear of the practice, and ended up being struck by lightning that caused his hair to turn yellow.

Zenitsu and Kaigaku hated each other, even though Zenitsu still respected Kaigaku as a brother and admired Kaigaku’s determination. Zenitsu has since created the Seventh Shikigami: Lightning God in the Breath of Thunder in order to be able to fight side by side with Kaigaku. 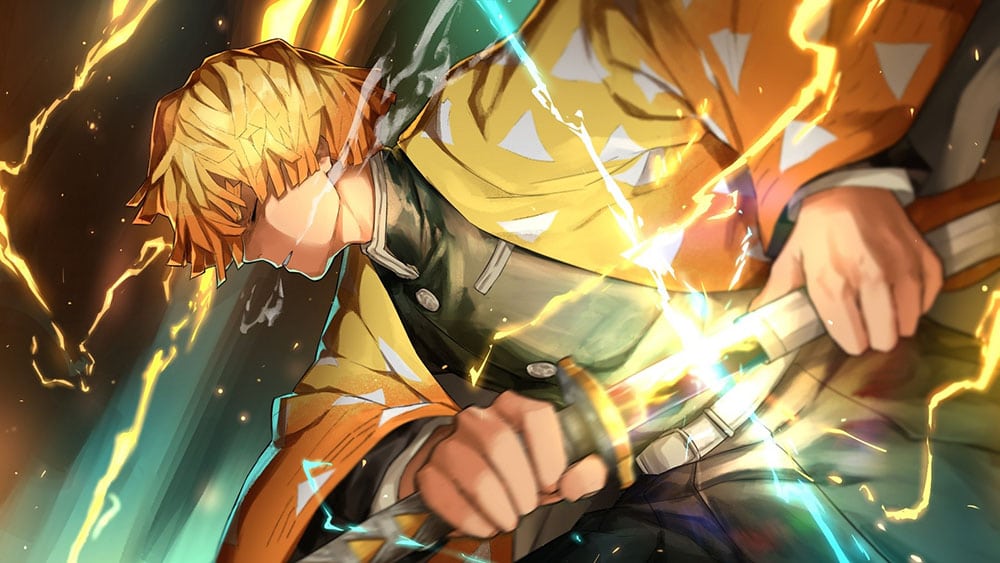 Zenitsu’s hearing is exceptionally touchy, permitting him to identify peril, indeed from indeed the most minor sounds. He can moreover listen to the internal contemplations of individuals in the event that he employs his hearing to its fullest potential and he can utilize this capacity to assist him find the evil presence by comparing the sounds made by the demon’s body with human-made sounds.

Unconscious Battling: Zenitsu is exceptionally solid when he rests. When he was in threat, the fear he was going through surpassed his limits and thumped him oblivious, that was when he came to his genuine potential; In that state, being able to utilize his swordsmanship to the most extreme depends totally on his instinctual. In any case, as time went on, Zenitsu picked up superior aptitudes and his boldness incredibly expanded, from which Zenitsu was able to show his sword abilities indeed whereas awake. Zenitsu’s reflex abilities: Zenitsu’s reflex abilities reach its extreme level, but his bashful nature regularly avoids him from utilizing it at its full